The Brains are parasite creatures created in an unidentified location. Their goal is to abduct innocent civilians and turn them evil, and to destroy the Hero Factory.

The brains were created shortly after the events of Hero Factory's mass Breakout as a mysterious figure commanded them to launch to the Hero's planet. A solar storm separated one of the swarms from the rest only for that same swarm to later be discovered by the Valiant. The brains then took over the ship's crew only for the Hero Factory to later free them from the parasite's control. Afterwards, they were fried by the Sun's temperature after trying to flee the ship. Stormer assumed the Hero Factory would come across the brains again.

The brains can latch onto any target and mind control them (as well as mutation in the case of Techno-Organic victims) and gain access to that target's intelligence but they cannot gain control of the target's emotions. Their creator has made it their sole purpose to destroy the Hero Factory.

In the Mirror World Alternate Universe, brains could not control their hosts for a long time. Also, most hosts would burn out after being controlled by brains. These brains also possessed wings and could fight using mental energy bolts. 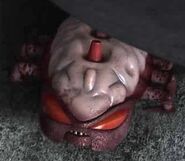 A Brain as seen in the Brain Attack episode.
Add a photo to this gallery
Retrieved from "https://herofactory.fandom.com/wiki/Brains?oldid=25476"
Community content is available under CC-BY-SA unless otherwise noted.