Flyer Beasts are giant beasts from underground that can fly.

After the tunnel had opened up in Antropolis city, Flyer Beasts came out and caused havoc everywhere. One attacked some buildings, even grabbing a radio tower off of one, and was persued by Breez. After chasing Flyer Beast she managed to wrap it in chains around a sky-scraper. It's not known what happened to it or any other members of it's breed or species after the Invasion from Below.

Flyer Beasts are yellow and black, with skeletal wings jutting from their backs. they have one normal hand and one big claw that can open and close, as well as a tail. Their upper part of its head is black with a horn, while the lower half is yellow.

Flyer Beast vs. Breez (set number 44020) comes with 91 pieces, and come with Breez, who's equipped with rocket boots and a chain. 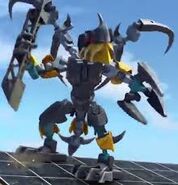 Flyer Beast on the rooftop

Flyer Beast vs Breez
Add a photo to this gallery
Retrieved from "https://herofactory.fandom.com/wiki/Flyer_Beast?oldid=25994"
Community content is available under CC-BY-SA unless otherwise noted.