Mission: Battle of New Stellac was a mission made by Thersher's Team on a burglary.

Defeat the Drone and save New Stellac City.

Thresher and his team responded to a routine burglary alarm, until they found a huge Drone packing enough plutonium cryptide canisters to level half the city. They fired at it, to draw its attention, but Thresher was injured protecting the Rookies. Stormer dragged his team leader clear and he ordered Von Ness to cover Thresher while he took on the Drone, but Von Ness instead took the Drop Ship to escape. Stormer jumped on and ordered him to land, but the coward shook him off. Stormer defeated the Drone by performing the "coolest move in Hero Factory history": jumping off the ship, knocking off the Drone's visual scanners and them plugging in the wrong sockets, shutting it down and saving the city and his team leader. Von Ness fled.

Thresher injured after being hit. 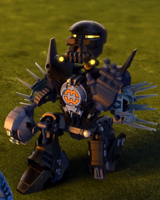 Stormer on Von Ness' Drop Ship.
Add a photo to this gallery

Retrieved from "https://herofactory.fandom.com/wiki/Mission:_Battle_of_New_Stellac?oldid=27116"
Community content is available under CC-BY-SA unless otherwise noted.