Mission: Ordeal of Fire was an effort made by the Alpha 1 Team to stop a gang of rogue Mining Robots from absorbing all of the Hero Fuel from Tanker Station 22.

Stop a group of criminal fire villains, formerly mining robots, from absorbing all of the Hero Fuel on Tanker Station 22.

Mining robots on the planet Tallos 5 were given upgrades that allow them to absorb fuel directly into their hands, cutting down time wasted by the bots returning to base and refuel. However, the mining robots were not designed to handle the amount of power they received, and went insane as a result. One of the robots, the Fire Lord, led a group consisting of Nitroblast, Drilldozer, and Jetbug on a mission to find and absorb as much Hero Fuel as possible. They began raiding various fuel depots, eventually ending up at Tanker Station 22.

When the fire villains arrived at Tanker Station 22, a Hero Alert was triggered, and Preston Stormer, Natalie Breez, Mark Surge, and William Furno arrived via Drop Ship. Furno was sent on recon efforts, and he caught view of Fire Lord absorbing fuel. As we was warning the others, Drilldozer used his Turbine Drill to emerge in front of the heroes. When the Heroes realized that the villains were capable of simply absorbing their blasts, they focused their efforts on evacuating the workers instead. While trying to escape with the final group, Fire Lord and his minions surrounded the civilians. Surge broke from the path and drew the villains fire away, allowing his team time to escape, while he was captured. The Heroes returned to the Factory, where they were upgraded to stronger 2.0 forms, and returned to the Tanker Station. Furno, attempting reconnaissance, blew their cover to Nitroblast when he lost control of his weapon. Nitroblast relayed the information to the Fire Lord, but Stormer arrived and began fighting Fire Lord. The villain leader told Stormer about his mining robot past on Tallos 5, and his addiction to power. Stormer offered to help the Fire Lord, but was rebuffed. Breez and Furno found their weapons locked together after Jetbug attacked them in a ship and Drilldozer ambushed them from beneath the ground. Nex and Evo arrived, and Evo used his heavy artillery to keep the villains at bay, while Nex separated Furno and Breez. Breez apprehended Drilldozer, and Nex arrested Nitroblast. Fire Lord, outnumbered, fled to the fuel container, and began to absorb it to gain more power. However, Surge took control of Jetbug's vehicle, throwing him out, and slammed the craft into Fire Lord, severing his absorbing hand. As the remaining villains were taken into custody to be taken to the Hero Factory, Stormer commended Surge for his actions.

Surge was upgraded to 2.0, and Fire Lord, Nitroblast, Drilldozer, and Jetbug are placed into a program where they will receive treatment for their power addiction. A ceremony honoring Surge's bravery was held, where he was presented with his Ice Spear Blaster. 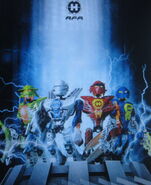 Drilldozer prepares to fire his weapon. 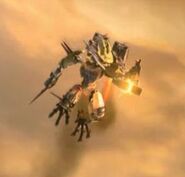 Jetbug prepares to fire his weapon on Furno.

Stormer against the Fire Lord.

Nitroblast prepares to attack the Heroes.

The Upgraded Alpha 1 Team.
Add a photo to this gallery

Retrieved from "https://herofactory.fandom.com/wiki/Mission:_Ordeal_of_Fire_(Event)?oldid=24330"
Community content is available under CC-BY-SA unless otherwise noted.