Mission: Savage Planet was an effort undertaken by the Alpha 1 Team.

Defeat Witch Doctor and return the Quaza to Quatros' core.

Aldous Witch was a scientist at the Hero Factory who was obsessed by the Heroes' Quaza Cores and wanted one for himself. When his thirst for power became too great, he tried to have himself implanted with a Quaza Core in the Assembly Tower, only to be stopped by one of his students: Preston Stormer. Because of Aldous' connection the the Hero Factory staff, he wasn't imprisoned, instead exiled from the planet, never to return.

The mild professor then went to Quatros, one of the last sources of Quaza in the galaxy, and using his his Hero disarm password, disabled the forcefield around the nature preserve. He then began to illegally mine Quaza. Sometime during this time, he found a device now known as the Skull Staff. Placing a piece of Quaza into the staff had the effect of granting him enormous, which transformed him into a tyrant called Witch Doctor. His power was contained to Quatros, however, as his Drop Ship was destroyed when he landed. Needing another Drop Ship, capable of transporting his new form and all the Quaza, he sent out a fake distress signal in order to draw in some heroes and their ship.

Rookie Hero Rocka responded to the distress call, and battled a Fangz with his Multi-Tool Ice Shield. He was then attacked by Witch Doctor and two more Fangz, knocking him unconscious.

Five other members of the Alpha 1 Team, Stormer, Dunkan Bulk, Jimi Stringer, William Furno and Julius Nex were given the Upgrade to animal armor and were sent to Quatros to assist Rocka. They found Rocka and Nex was able to heal him. However, Witch Doctor appeared and Furno raced after him. Despite the Upgrade to 3.0, Furno was unable to defeat Witch Doctor and he, Stringer and Nex began to battle Waspix, Raw-Jaw and Scorpio. However, Witch Doctor recalled them, having something else for them to do.

Rocka was given the Upgrade to 3.0 and a Multifunctional Claw, then Nathaniel Zib determined the ancient Quaza Temple was there and the Alpha 1 searched for a transporter just as Witch Doctor forced Raw-Jaw to continue mining for Quaza faster. The Alpha 1 found the transporter, a teleporter. Stormer let Furno and Rocka each set up a team: Furno leading Nex and Stringer and Bulk and Stormer supporting Rocka. Rocka's team took the teleporter while Furno took his through the ravine and over the giant tree branches. However, when Rocka's team emerged from the teleporter, they wer attacked by a Fangz which made them realize that they had shrunk! Despite this, Rocka was able to defeat it and saw Raw-Jaw steal the last of the mined Quaza. Zib confirmed that if the Quaza was not returned, Quatros would break apart as Furno got into battle with Waspix while Nex and Stringer did battle with Scorpio. Rocka's team learned that they had to drop Quaza through the top of the temple. However, they alerted the Fangz while Nex was knocked onto a branch by Scorpio's Tail Whip and his claw couldn't take his weight. Furno rescued him after Waspix was tied up in some vines after the Rookie Hero said that Mark Surge could have his game system and to tell Natalie Breez that he loved her. Just then, Waspix broke free, but Stringer was able to defeat her using a "roboball hyper punch" and freed her by ripping off the Quaza Spikes with his Triple-Bladed Bear Claw. Scorpio then rose and broke Furno's jets. Meanwhile, Rocka and Bulk were captured when trying to jump over Witch Doctor.

Stormer informed Furno that Rocka and Bulk had been captured, so they made their way to the Quaza Temple with Scorpio trailing them. Witch Doctor took control of Scorpio, but Stringer and Furno tossed Furno onto his back using a "roboball dump" and he ripped off the Quaza Spike. Scorpio then attacked Witch Doctor for revenge, while Nex and Stringer returned Rocka's team to their original size. Witch Doctor made Raw-Jaw attack Scorpio and eventually threw him down a chute. Stringer freed Raw-Jaw while Stormer took on Aldous, starting with an ice blast from Stormer's Multifunctional Claw.

Furno improvised a way for Rocka to beat the Witch Doctor and he and Nex used ancient armor pieces to transform Rocka into Rocka XL, giving him even power to Witch Doctor and allowing him to fight him evenly because Stormer was losing. Stringer and Bulk freed the Fangz, but Witch Doctor eventually gained the upper hand in their fight. Luckily, Stormer managed to get the Skull Staff away from Aldous, draining his power. Furno then threw his Plasma Bow into the blimp with the Quaza, but it was not enough to through all the Quaza through the top of the temple. Bulk then used his Wrist Blades to ssend Furno flying into the blimp and he banged his Plasma Bow into one of the jets until it exploded and was sent through the top of the temple roof, returning the Quaza to the planet's core and keeping it from exploding.

Witch Doctor was taken into custody by the Alpha 1 and Stormer commented Furno on settling his differences with Rocka to save the day. Later, Merrick Fortis figured out how to combine elements and used it to give him the Upgrade to 3.0 and later went to Quatros to perform reconnaissance, in case the Witch Doctor had made contacts with any other criminals elsewhere in the universe. 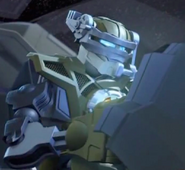 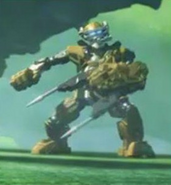 Rocka attemps to defend himself with his Multi-Tool Ice Shield.

Furno after being defeated by Witch Doctor.

Rocka 3.0.
Add a photo to this gallery 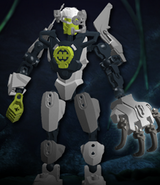 Merrick Fortis on Quatros.
Add a photo to this gallery

Retrieved from "https://herofactory.fandom.com/wiki/Mission:_Savage_Planet_(Event)?oldid=23825"
Community content is available under CC-BY-SA unless otherwise noted.