Mission: Stormer's Infection was an effort made by the Alpha 1 Team on Mekron City/Makuhero City.

XPlode and Rotor, two criminals under Von Nebula's employ, were assigned to steal explosives from Merak 9. Though they met resistance from the Alpha 1 Team, both were able to escape. They later traveled to Lemus 2 to steal more explosives, but were stopped by Alpha 1. XPlode escaped empty-handed, while Rotor was captured.

Corroder, another henchbot of Von Nebula, attacked the construction site of Penitentiary 1331, forcing several members of Alpha 1 to intervene. Though Corroder gained the upper hand over Mark Surge, Jimi Stringer, and Dunkan Bulk, Natalie Breez and William Furno arrived, and successfully drove Corroder off. Von Nebula swiftly instructed Meltdown to carry out the next stage of his plan.

Chief Drax was corrupted by Meltdown, and Stormer, Furno, Breez and Surge arrived to see what was wrong, but Drax attacked him. Stormer subdued Drax, but he sent his Floater Enforcer Drones after them. Stormer told the Rookie 1 Team to take them on as target practice, but he took them out instead. Just then, Meltdown jumped through the roof and attacked them with his Radioactive Sludge Shooter. One of his blasts was aimed for Furno, but as expected, Stormer took the hit and was infected with nanobots. Meltdown escaped through the roof.

Upon returning to the Hero Factory, Nathaniel Zib confirmed that both Drax and Stormer were subdued to Nanobots which drove them insane. Stormer was then corrupted and attacked his team, knocking Dunkan Bulk off a Training Sphere. He stole a jetpack and escaped.

Furno then realized Stormer was going to destroy a billboard of himself as a giant monster he was tricked into helping make. His Rookie 1 Team went to Lunar Tratix to get a cure. Furno took on Stormer and eventually defeated by comparing him to Von Ness. He was eventually brought back to Hero Factory and cured. Since this, Stormer assumes that someone wants him dead. Von Nebula then decided to target New Stellac City for the final part of his plan.

The Alpha 1 later journeyed to New Stellac City, where Stormer's old team had taken on a huge Drone and Von Ness had left him and the team leader, Thresher. They took on Thunder, Corroder, XPlode and Meltdown, with the Rookie 1. Stormer and Furno eventually destroyed the Black Hole, defeat Von Nebula, and imprison him in the Black Hole Orb Staff while the rest of the Alpha 1 and Rookie 1 imprisoned the other 4.

The Heroes flying into Mekron City. 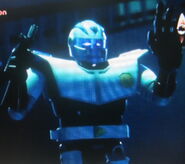 Meltdown snares at the Heroes in Mekron City.

Stormer having been corrupted by nanobots. 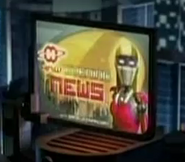 Daniella Capricorn's billboard in Makuhero City.
Add a photo to this gallery

Retrieved from "https://herofactory.fandom.com/wiki/Mission:_Stormer%27s_Infection?oldid=27087"
Community content is available under CC-BY-SA unless otherwise noted.