Mission: Von Nebula was the cause of a series of conflicts, fought by the Alpha 1 Team against Von Nebula's crime syndicate.

Discover the culprit behind the a series of coordinated attacks by various criminals, and apprehend the group.

Von Nebula was once the rookie Hero Von Ness, though he defected the organization after fleeing during an important mission. Von Nebula, seeking to take revenge over the wrongs he believed were inflicted upon him, recruited a number of infamous criminals to his cause.

Battle against XPlode and Rotor

XPlode and Rotor, two criminals under Von Nebula's employ, were assigned to steal explosives from Merak 9. Though they met resistance from the Alpha 1 Team, both were able to escape. They later traveled to Lemus 2 to steal more explosives, but were stopped by Alpha 1. XPlode escaped empty-handed, while Rotor was captured.

Corroder, another henchbot of Von Nebula, attacked the construction site of Penitentiary 1331, forcing several members of Alpha 1 to intervene. Though Corroder gained the upper hand over Mark Surge, Jimi Stringer, and Dunkan Bulk, Natalie Breez and William Furno arrived, and successfully drove Corroder off. Von Nebula swiftly instructed Meltdown to carry out the next stage of his plan.

Meltdown infected Stormer's old friend, Police Chief Drax, with nanobots that caused him to go rogue. Stormer, along with the Alpha 1 rookies, went to visit Drax, who attacked them with his Floater Enforcer Drones. They subdued Drax, but Meltdown arrived, and infected Stormer as well. Upon returning to Hero Factory, Stormer went on a rampage, forcing Furno to fight him while the other members of Alpha 1 searched for a cure. Stormer was stopped, and a cure was made for him.

Von Nebula created an unnatural meteor to strike near a monument to Preston Stormer in New Stellac City to draw the senior Alpha 1 members to investigate. Once at the city, Thunder and Corroder arrived. The three Heroes began to duel Corroder and Thunder, when Thunder unveiled his Nebula Gas Cannon. Firing the cannon, Stormer took the hit, but was protected by new experimental armor Quadal had given him. Soon after this, the rookie facet of Alpha 1 arrived, and Natalie Breez scanned for nebula gas traces when she found Thunder. As Thunder and Corroder began to attack, the senior Alpha 1 members saved the rookies. XPlode and Meltdown then arrived, joining the fight. Von Nebula opened his black hole, and stripped the Hero of their weapons and gadgets. Stormer and William Furno allowed themselves to be absorbed into the black hole to defeat Von Nebula. The Heroes began a battle of attrition, exhausting the criminal's ammunition. The villains eventually ran out, but XPlode used his Explosive Spikes as a last-ditch attempt to take out the Heroes. However, the Heroes had previously been given Particle Separators, allowing them to dodge the attack. They defeated the villains and imprisoned them using makeshift metal bars.

In the black hole, Furno remembered that they had Anti-Gravity Thruster Rings in their boots, which they could throw into the vortex, and destroy the black hole. Von Nebula learned that one of the Heroes had all of the anti-gravity rings. Thinking it had to be Stormer, Von Nebula attacked him, while Furno dropped the rings into the vortex. Stormer lunged at Von Nebula, grabbing his Black Hole Orb Staff and absorbing Von Nebula into it. The two managed to exit the black hole, which superheated and exploded.

Furno and Stormer landed in New Stellac, reuniting with the rest of the team and escorting the criminals and the staff back to Hero Factory. Upon their arrival, Stormer, Stringer, and Bulk were interviewed by Daniella Capricorn. Stormer credited Furno, Breez, and Mark Surge for the success of the mission, where he called Furno by his name for the first time. The criminals were imprisoned, and the Black Hole Orb Staff put under heavy guard.

The Drone converted into a monument.

Thunder emerges from his pod.

Corroder firing acid on the Heroes.

Von Nebula in his Black Hole. 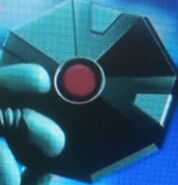 Breez, Surge, Bulk and Stringer hiding from the Villains' attack.

Meltdown realizes his weapon has run out of ammo.

Von Nebula's defeat.
Add a photo to this gallery

Retrieved from "https://herofactory.fandom.com/wiki/Mission:_Von_Nebula?oldid=24328"
Community content is available under CC-BY-SA unless otherwise noted.