Quatros is a planet in the Hero Factory Universe.

Quatros is a techno-orgainic planet with Quaza to be found. Mining for Quaza was banned when the Hero Factory realized that it can affect plant and animals on the planet, and so it became a nature preserve. However, Aldous Witch disabled the protective barrier using his Hero disarm password and became the Witch Doctor, illegally mining for Quaza and controlling the animals using the Skull Staff.

The Alpha 1 Team journeyed to Quatros and battled the creatures Witch Doctor had corrupted. They were able to remove their Quaza Spikes and put the Quaza back in the planet's core. Rocka and Stormer defeated Witch Doctor and took him into custody. Merrick Fortis is currently doing renconnaissance on the planet to make sure Witch Doctor hasn't contacted any other villains.

According to Stormer, Quatros will be okay as long as the Witch Doctor never returns. 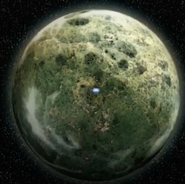 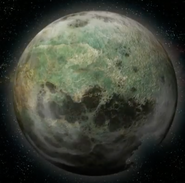 Add a photo to this gallery

Retrieved from "https://herofactory.fandom.com/wiki/Quatros?oldid=26456"
Community content is available under CC-BY-SA unless otherwise noted.