The Tunneler Beast is a beast from the Invasion From Below.

When Mark Surge and Rocka, in their battle machines, landed in the cavern and stuck to the rocks, several of the beasts attacked them.

One tried to attack Rocka who's Crawler Machine had been knocked over by a magnetic ore rock. The Hero used one of his battle machine's chainsaws to cut the beasts hand, aggravating it. Before it could strike, however, Surge, using his Combat Machine, shot it off the Hero.

Another tried to attack Surge, but the Hero merely shot it away.

When a magnetic ore rock collided with the front of the Combat Machine, were Surge was sitting, and destroyed it, a Tunneler Beast grabbed the defenseless, floating Hero and carried him off.

Rocka, activating the Combat Machine's flight mode, tried flying through the magnetic field. A Tunneler Beast tried to grab him, too, but missed and fell.

It is unknown what happened to them after the fall of the Queen.

The Tunneler Beast is red and green, with four legs and short arms with hands at the ends of them, a third of a cocoon at the back, and has an under bite.

Tunneler Beast vs. Surge (set number 44024) comes with 59 pieces and includes Surge and his gun. 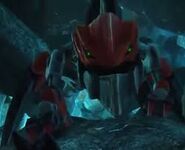 Add a photo to this gallery
Retrieved from "https://herofactory.fandom.com/wiki/Tunneler_Beast?oldid=25982"
Community content is available under CC-BY-SA unless otherwise noted.